Talented horse rider Ellie Gould had dreams of joining the mounted section of the police force.

But those dreams were cut cruelly short in May when she was stabbed 13 times by the boy she had been dating for all but five months.

Thomas Griffiths and Ellie Gould were both A-level students at Hardenhuish School, Chippenham. She lived in Calne, on quiet residential street Springfield Drive. He was from Derry Hill, a village perched on the A4 between the two towns.

They had began dating in January 2019. By May both were in the midst of mock exam fever. Ellie, a committed student, was said to be keen to focus on her academic studies. 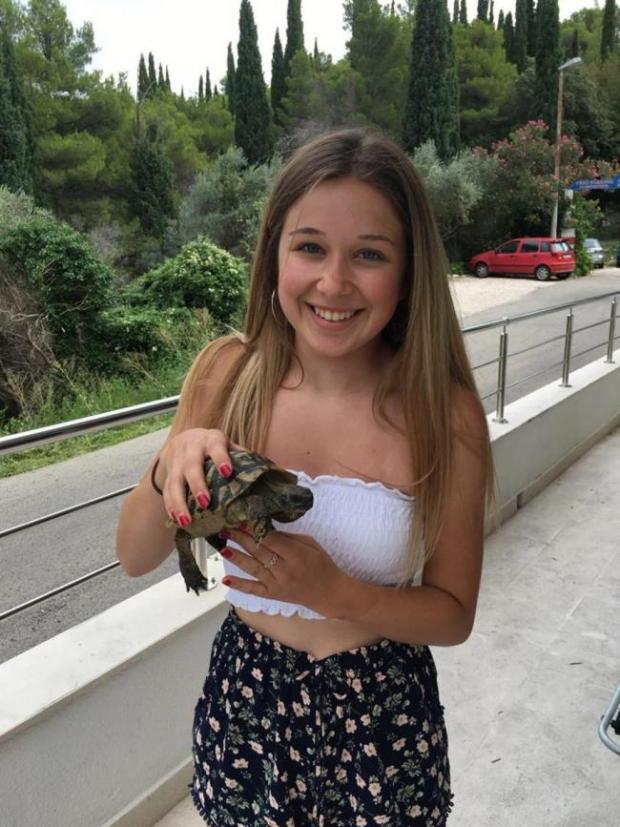 On May 2 she told friends that she planned to end the relationship with Griffiths. She later clarified the point, texting a friend saying that it was over.

The next day, a Friday, Griffiths killed her.

Griffiths’ mum drove him to Hardenhuish. But the boy emailed his teachers claiming he was feeling ill and couldn’t make it to class. He texted a friend, telling them he was going home to collect more books.

He went to Chippenham bus station. At 8.30am CCTV put him on a bus travelling back to Derry Hill, getting off at his stop at around 8.40am.

Det Ch Insp Jim Taylor, who led the investigation, said: “What he didn’t count on was that his mum would return home as well.

“He was concerned he would get caught bunking off school so he hid in his bedroom wardrobe until his mum went back out.”

Learner driver Griffiths grabbed the keys to a silver Ford Focus. At around 10.30am, Ellie Gould’s neighbour saw a young man matching the boy’s description knocking on the Gould’s front door.

“The details of what happened next come from Tom,” said Mr Taylor.

He claimed he had gone to Ellie’s house that morning to study with his girlfriend. Her plan that day was to study in the morning then go to school in the afternoon.

Griffiths said he and Ellie began to argue. He has refused to tell detectives what the argument was about, but the suspicion is that it concerned their relationship coming to an end.

“The conversation became heated. He says he can remember placing his hands on her throat but after that point he has no recollection of what happens next,” Mr Taylor said.

“The next moment he recollects is after he’s stabbed Ellie and he’s standing there with a kitchen knife.”

Phone evidence puts Griffiths at Ellie’s house between 10.58am and 11.51am.

She lay on the floor for three hours before her body was discovered by dad Matthew at 3pm.

Ellie had been stabbed at least 13 times in the neck. She bled to death and was found face-down on the kitchen floor.

Griffiths tried to clean up the scene. He cleaned his shoes – a pair of black Vans trainers. Cloths used to mop the kitchen were stuffed in a black bin liner.

At 11.56am CCTV from a bus snapped his Ford Fiesta driving back to Derry Hill.

His clothes – a black hooded top and jeans – were stuffed in the washing machine. Griffiths stashed the black bin liner in woodland nine minutes’ walk from his home on Lansdowne Crescent.

A neighbour spotted Griffiths as he returned from his walk. Concerned about scratches on the boy’s neck, the neighbour was told by Griffiths that he had been self-harming – prompted by stress over his exams.

Griffiths was driven to school by the neighbour. His mum was called and picked him up from school.

That afternoon Griffiths messaged Ellie on his iPhone. He also started a group chat of the couple’s friends, saying he was self-harming as a result of stress brought on by the poor health of his dad – who had been diagnosed with cancer – and grandmother. 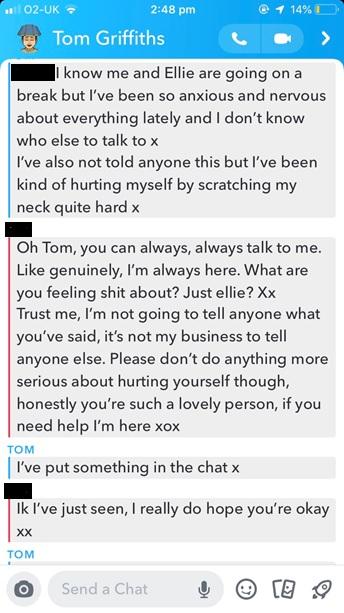 One of the set of messages sent by Griffiths to a friend on May 3 Picture: WILTSHIRE POLICE

Griffiths asked his mum to drive him to Calne so he could see a friend in the town.

Officers arrested the boy outside his friend’s house at around 6pm. 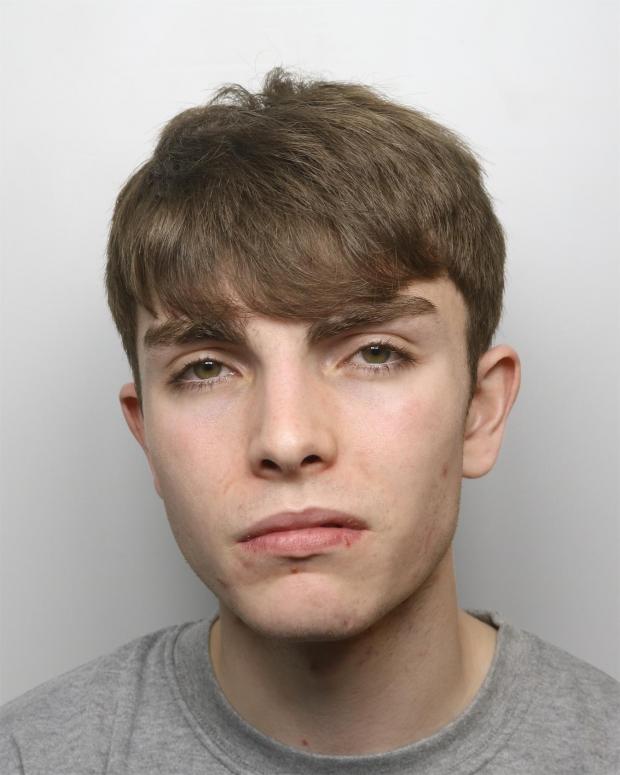 Det Ch Insp Taylor said: “With all domestic related murders we will always look to the people closest to the victim and people who have a relationship with her. In this case, Tom Griffiths was someone we needed to speak to urgently.

“He matched the description of the person who had knocked on the door earlier in the day and he was presenting with scratch marks to his face.

“When officers spoke to him and saw his demeanour and heard his account of his movements that day they weren’t happy and arrested him on suspicion of murder.”

Griffiths was taken to Melksham police station and interviewed over three days.

That weekend the evidence began stacking up against the boy. Detectives showed him CCTV and mobile phone data putting him at the scene.

“As the evidence started to be gathered and we unpicked his account we presented him with images of his car and the location of his phone he still denied his involvement,” Mr Taylor said.

Blood found on his trainers was a match for Ellie’s blood. The Crown Prosecution Service gave the green light for police to charge the boy with murder.

Griffiths pleaded guilty to murder at a plea hearing at Bristol Crown Court on August 29.

No more traffic wanted near site

Weather alert as Wiltshire set to...

HIGH winds are forecast to sweep across Swindon and Wiltshire tomorrow, sparking a weather alert. It warns gusts of over 40mph could cause s...

Flybe ‘at risk of collapse’ over...

Flybe bosses have held crunch talks with the Government in a bid to save the airline. Discussions were held with the Department for Business...

A motorist who killed a veteran after hitting him with his car on the A303 in Wiltshire has been given a 16 year prison sentence. Tarkan Agc...