Following on from the last Climate Emergency Steering Group meeting, community members expressed that although the Town Council has taken steps and continues to address issues within their control, it is not always obvious that a Climate Emergency has been declared, nor is there a visible recognition of this within the town.

With this in mind, Cllr Alex Kay (Chair of the Environment & Planning Committee) and Town Council Communications Officer, Lydia Booth, who are both active within the council in carrying out climate action initiatives, identified the need for a Town Council Climate Emergency logo. 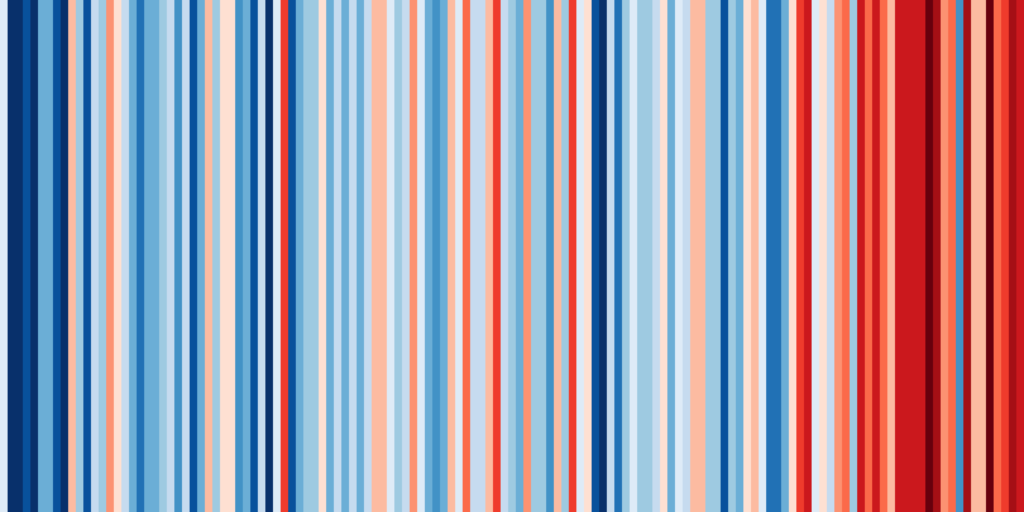 The ‘warming stripe’ graphics shown above are a visual representation of the change in temperature as measured in England from 1884 (left) to 2018 (right) using data from the UK Met Office. Each stripe represents the temperature in England averaged over a year.

“The Show Your Stripes visualisations are an incredibly powerful and factual representation of how our climate, even locally, is warming up. If you visit the Show Your Stripes website, you can select countries around the globe to see their stripes. They all differ slightly, but they all tell the same undeniable story and we felt this was a powerful message to incorporate.” Lydia explained.

“Although this logo design was finalised before the recent catastrophic fires in Australia, the ominous red sky formed by the stripes behind the logo’s swan hopefully serves as a reminder of how detrimental human activity threatens not just us, but currently even more so, wildlife.”

The new Climate Emergency logo will be applied to any communications, signage or notices involving environmental initiatives that the Town Council works on going forward or has realised under the current council, in order to draw attention to the issues and raise awareness in the community and beyond. This will include projects which focus on increasing biodiversity and reducing single-use plastic consumption which are intrinsically linked to climate change.

“We are thrilled with the new logo, which will help to identify projects which fall under the environmental banner. Over the past year, and indeed prior to declaring the emergency, we’ve worked on lots of projects and have many more in the pipeline. The next one to launch will be our Community Fridge, which will tackle on a local scale not only food poverty, but the huge issue of food wastage; a major contributor to global warming.”

If you have a project or event idea, which addresses or raises awareness about the Climate Emergency, get in touch with our Communications Manager HERE to find out how the council might be able to support you. Please note, projects must be based in the BA15 1 or 2 postal area.

Visit the Town Council’s Climate Emergency page HERE to find out more about projects we have implemented.

To see global temperature increases for yourself, visit the Show Your Stripes website HERE

WHAT YOU SAID: Panic buying and...

We have been covering a lot of stories around coronavirus. And the various issues have aroused strong feelings in many of our readers. Our r...

THE devolution and transfer of assets to Bradford on Avon town council, which would save Wiltshire Council £126,000, was approved at Tuesda...

Awards recognition for hair salon is...

As we kick off the Wiltshire Business Awards 2020, we take a look back at last year’s winners and find out what they think about entering....